VMT RP makes it possible to position a robot gripper equipped with sensors in a defined position with respect to an object, for example, a chassis.

In contrast to the single-step measurement systems, the robot position is adapted continuously with the help of the sensor signals that are recorded.

VMT RP evaluates the sensor signals recorded on the current object and corrects the robot position till the sensor measurement values once again conform to the values of the learning position on the reference object. The robot gripper then once again has the exactly identical relative position to the current object that it had at the time of setting up to the reference object.

This system can be applied, e.g. for guiding stamping tongs for STFP plants.

In most processing steps, an add-on piece or a tool must be positioned relative the workpiece. The constant relative reference point is crucial for successful processing.

The choice of detection points on the workpiece and the robust conversion of this information into a position correction of the tool are crucial for accurate positioning. 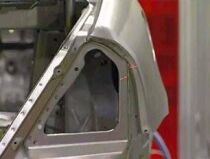 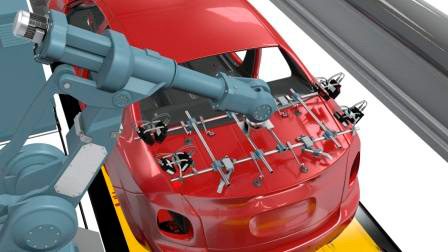